Overview: What is Nail Fungus

Nail fungus is caused by fungi, most commonly dermatophytes and less commonly, yeast (Candida). The fungus usually invades the nail at the free edge and then spreads down the side toward the base. Less commonly, it starts from the base and moves upward. Infection may occur in patches or streaks on the nail surface. Nail fungus infections are progressive, recurring and contagious.

Other contributing factors include a history of athlete’s foot and excessive perspiration. 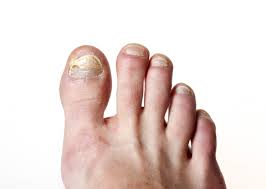